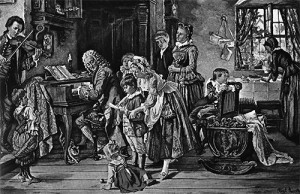 Bach for More — a concert to celebrate the great master of the baroque era, Johann Sebastian Bach. He really had the last word of this era and no one said it as well as he did.

Per Sonatori will take you back in time and give you a front row seat to experience Bach’s music in this transformational setting. J.S. Bach (played by David Popoff) will be personally appearing in the concert to give his own commentary of his works and life. His wife, soprano Anna Magdalena (Kerri Cornish-Morten), will chat with her husband, filling in the rich history of the music and will perform his beautiful arias accompanied by the warm tones of the baroque flute, violin and portative organ.

Bach was a masterful organist and harpsichord player, and he wrote demanding and exciting compositions for these instruments. Many of us have heard Bach’s keyboard pieces played on the modern piano, but how often do we get to hear them played on the instruments that he wrote for? Now is your chance. Harpsichordist Sarah Stubbe will make her debut performance with Per Sonatori. Sarah will be performing a virtuosic harpsichord piece which will be a dramatic contrast to the other baroque keyboard instruments featured in this concert.

Come on out to hear Bach’s finest works in a historical setting.